I bought a book for my daughter's boyfriend, Sean, for his birthday and decided to make him a bookmark to go with it. He had passed remarks that he kept losing his place in his book, so a bookmark seemed appropriate. A handmade bookmark would also be more personal and unique to him.

The shabby chic look I had learnt at Sheena's workshop can also be quite masculine. Sean supports Watford - I know......... but someone has to! Watford play in black and yellow so I used those colours as you can see from the photo. 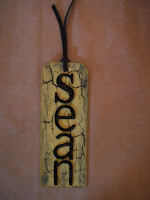 I cut a piece of mount board for the bookmark and rounded the top corners then painted it black. Once I had dried this first coat with the heat gun, I painted over it with PVA glue which I also dried. The yellow coat was then put on and as I dried it the crackles appeared. I love this technique. The chipboard letters were done with the same technique, painted first with yellow and then the black as a contrast to the base and then glued on. To finish it off I dragged on some black soot distress ink using cut and dry foam and then sprayed it with clear spray and shine.

There is a saying amongst crafters that they don't waste a blooming thing and I am no exception. Last winter I bought leather boots which had leather strips on the zips but I lost one and of course I kept the other one as it might come in handy. Yes, you guessed it, Sean now has it on his bookmark!

Needless to say, Sean really liked his bookmark.
Posted by Joanie at 09:00

Joanie
I live in Todmorden, am married to Rob between us we have 5 kids and 7 gorgeous grandchildren under the age of six. Through crafting I have met so many lovely people and made some great friends. I love all kinds of crafting but mixed media, patchwork quilting and machine embroidery are my favourites. 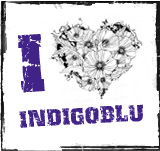 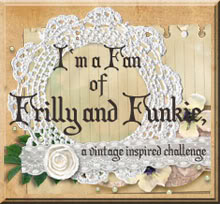